After leaving the PA Dutch Country Resort Campground outside Lebanon, PA we headed on down the road to the Jamestown/Williamsburg/Yorktown triangle in Virginia.  We set up camp at First Landing State Park in Virginia Beach, VA.  A beautiful state park with campsites just over the dunes to the Chesapeake Bay. (Those are the dunes behind the Live Oak trees surrounding our campsite) 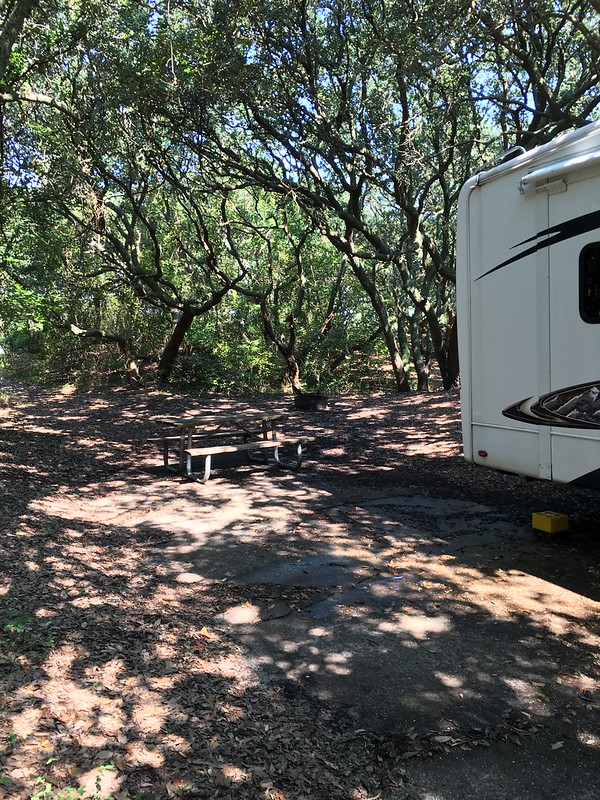 Jamestown is a fascinating place.  Founded in 1607 by 104 men and boys who travelled across the ocean to establish a commercial venture.  It is known as the “First Successful English Settlement in America”  but it nearly failed (probably because there were no women in the first voyage). We toured the archeological part of the site.  I was particularly interested in seeing the recent digs that uncovered the graves of the settlers and found objects that described their life in the colony as described in an exhibit at the Smithsonian http://anthropology.si.edu/writteninbone/unearthing_evidence.html .           We were very lucky to have Mary Anna as our guide.  She is a young archaeologist who has made some major discoveries.  She talked about the 3 graves in the area of the first church the settlers built. 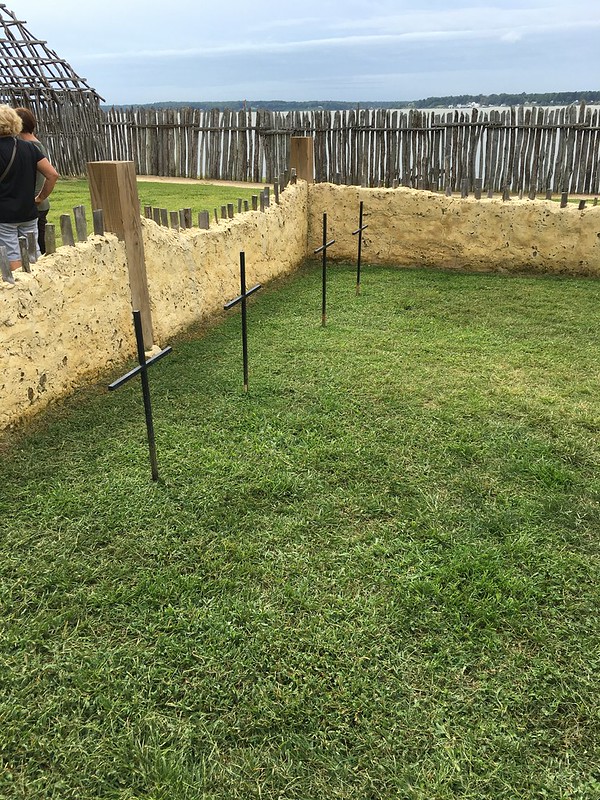 One contained a small metal box that was eventually found to be Roman Catholic in origin.  That is very interesting since the settlers were always assumed to be Church of England.  The object was found in the grave of a very high-ranking member of the settlement.  His death was traced (yes – really – how do they know?) to 1608 when the colony nearly starved to death.  He is buried next to an Episcopal priest.  Apparently when the colony faced starvation their true religion came out.  By the way, they starved because they became aggressive to their Powhatan neighbors.  After the Powhatan tribe were very hospitable and helped the original settlers with food, the settlers went with guns to demand more!  104 Englishmen surrounded by thousands of Natives – how stupid was that!  I encourage you to visit the site.  There are a lot more stories that have been uncovered, including Jamestown’s growth into a thriving commercial center.

We visited Williamsburg twice.  Our friends Steve and Debbie Rowland, who live in Virginia Beach, gave us a walking tour the first day.  In addition to the preserved Capital Building, Governors Palace and the armory, there are a lot of homes in Williamsburg still counted as private residences that were built in the 17th century. 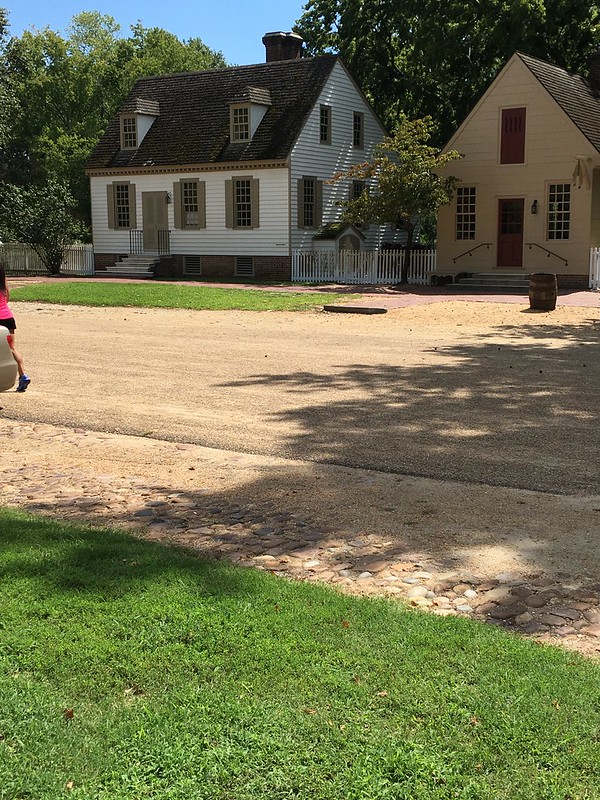 The Duke of Gloucester Street also has numerous stores with period craftsmen and hand-made items for sale.  We went back a second day to take a tour of the Capital building and the Governor’s Palace.  Best of all we listened to George Washington’s farewell address upon his retirement from the Presidency of the United States.  (really ,really good actor!). 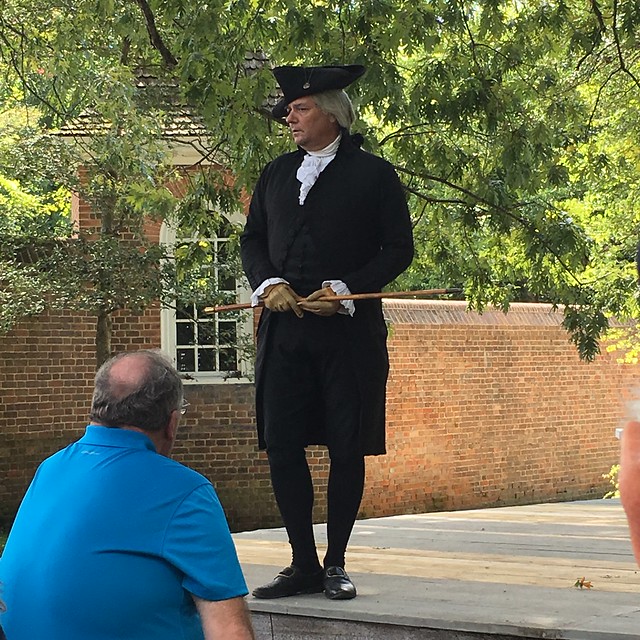 Some very poignant words about the office of the President that should be required reading for politicians today. Walking on the street with the numerous people in period costume answering questions, it really felt like a walk back in time.

Finally, we visited Yorktown – the site of Cornwallis defeat and surrender to George Washington.  I had never been there.  Fascinating that such a small space holds such a big position in our country’s history.  Washington, with the help of the French, was able to win his first major battle against the English.  Trapped on a peninsula, surrounded by American and French troops Cornwallis was forced to surrender.  In the negotiations, Cornwallis wanted an “honorable” surrender meaning freedom for his troops, and to carry their flag while they marched off the field.  But, because the British had not given those terms when they defeated the Americans at the battle of Charleston, it was denied. (Picture courtesy of National Park Service files)

There are stories that the British troops got roaring drunk the night before surrender, some unable to march the next day as they had to walk between the French troops and the ragtag American army to give up their arms and troop colors and surrender to POW camps.  Really a great story.  If you go buy the CD and listen to the story as you drive the trail around the Park.

It was a great week – lots of walking, catching up with old friends, good food and great wine.

We have now moved down the coast, stopping in Fayetteville, NC to visit Margie and John Labadie. We went with them to Wilmington, North Carolina, watched the surfers and had a great lunch on the pier.  Beautiful weather, great friends, great times. Now on to Florida, to learn more about this great country of ours.

Two roads diverged in a wood, and I –

I took the one less traveled by.

And that has made all the difference. (Robert Frost)

It was 12 months ago last September, when Bill and I were travelling home from the Badlands of South Dakota that we realized we were at a crossroad.  We wanted to downsize our home – sell the big house in which we raised our family and move into something smaller. Bill was all for that because he hated mowing the grass and shoveling snow. I was also listing more and more places I wanted to see like National Parks, state parks, cities, towns, whole areas of the country that Bill and I hadn’t explored yet.  We both love to travel.  The Fickle Finger of Fate had visited us on this trip where we met a couple who were living full-time in their RV and travelling around the country.  That trip home took 4 days – just enough time to percolate an idea – a decision of great importance.  We could buy a smaller house in a new community or we could buy a bigger RV and live in it, with the added travel feature we both love.

We were at a crossroad.  Do we go this way or that?  Do we pick the steady “normal” path to retirement in a nice house or do we pick up our roots and satisfy our wanderlust?  Do we pick a cute little house in the suburbs that requires cleaning and mowing (yuck!) and take on a new mortgage or do we pay off all our loans and take to the open road (I think you can see where this is heading).  Arrrgh ye be right matey!!  We chose the vagabond life.

‘We’re going this way, that way,
Forwards backwards,
Over the Irish Sea.
A bottle of rum to fill my tum
A Pirates’ life for me’

We are looking forward to seeing all the sights there are to see in this great country — all the places we had to drive by before and couldn’t stop.  Next stop, Williamsburg, VA which you will hear more about in future posts.  After that, on to Florida and then a sharp right turn to Utah and parts unknown.

Below is a picture of our “ship.”  We are happy to take you along through pictures and descriptions of the fascinating places and people we meet on the way.  Stay tuned….

Our first post will be made soon. Stay tuned…